The Euston Tap was at the top of my list for craft beer, as our very own Sheffield Tap has just been very newly named one of the top 10 brew pubs in Europe, according to the Guardian. I was also recommended it by Sam of Good Beer on Friday,  so I was sure I should try it out.

As I arrived in Euston I was unsure of its exact whereabouts so I exited the station and had a little walkabout and approached a building set back from the road, a little tall and a little out of place. I later learnt that it’s a Grade II listed Portland Stone Lodge, an original part of the station.

It’s small inside, dingy, but the best kind of pub dingy. A number of cask and keg ales were available from the menu, and a huge variety of bottles were stacked in the two massive chillers either side of the bar.

The staff were very happy to advise me on drinks according to my preferences and dived into the big chillers, filled of all the best brewerys: local Kernel and local to me Thornbridge and Buxton. I was passed a Siren Craft Brew’s Soundwave IPA, which surprisingly I’ve not encountered yet! 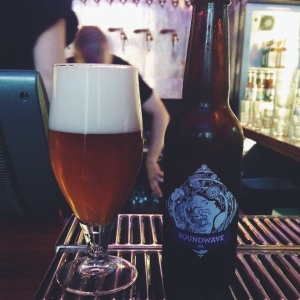 This is a West Coast IPA (5.6%) and it’s just perfect. The hops are beautifully balanced with the malts, an aggressive citrus bitterness, finished with lovely honey notes. Maybe aggressive isn’t quite the right word as it is just so smooth and exceptionally pleasant.

Siren haven’t provided us with any specific information on hops or malts, but I’m definitely detecting some Citra and Amarillo in there – the best hops. A great recommendation from the guys at the lovely Euston Tap – they’ve found me my perfect sessionable beer!